Putting Cleveland Back on The Map 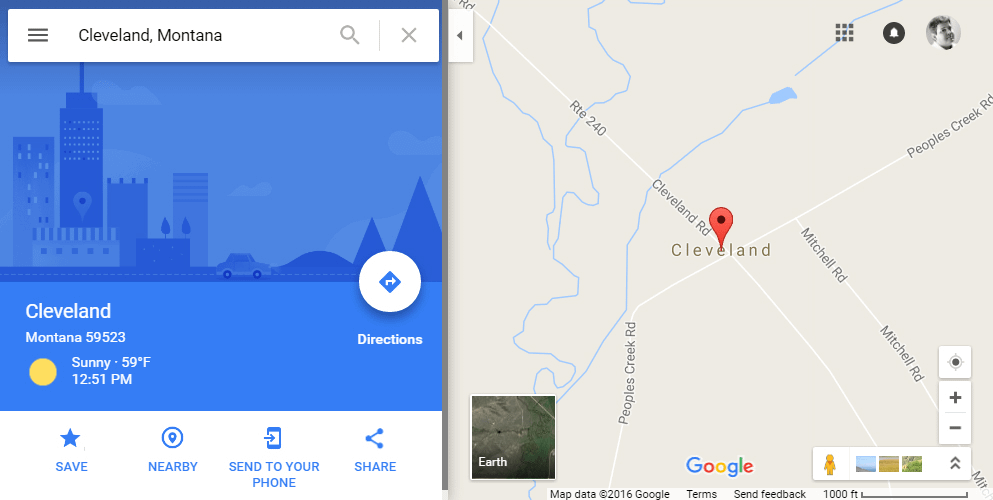 If any of you tried to search for Cleveland, Montana using Google Maps in the past you might have been confused. Instead of directing you to a dusty little town in south central Blaine County, Montana you instead ended up on top of Mount Cleveland, the tallest mountain in Glacier National Park. This strange happenstance began nearly three years ago. And I wasn’t happy.

Truth be told, it isn’t hard arguing why Cleveland should stay on the map. Cleveland no longer has its saloon, which was the only place doing business in “downtown” Cleveland for many years. Cleveland’s greatest claim to fame, I’m told, is that it once held the world’s shortest parade. Seriously. Cleveland, however, does still have a small school serving approximately eight grade school children. It also has its rodeo grounds, which alone should qualify it to stay on the map in a place like Montana. Beyond that, however, there aren’t many remnants of old Cleveland.

If you use Google (ironic, I know) to look up the history of Cleveland, Montana you won’t find much. Not much at all. We do know Blaine County, where Cleveland is located, was named after James G. Blaine, the “Plumed Knight” and former governor from the state of Maine who later went on to become the Secretary of the Interior. In 1884 Blaine ran for President of the United States on the Republican ticket. He lost to Grover Cleveland, a Democrat. Four years later President Cleveland signed a bill granting statehood to Montana. But Blaine County would not become a county until it broke off from Chouteau County formally on March 2, 1912. And let’s be honest, Chouteau County hasn’t been the same since. 🙂

I suspect Cleveland was named after the man who was President when Montana achieved statehood, but I can’t be certain. It could have been named after a rancher who lived there for all I know. But if it was named after President Cleveland, can you imagine what might have happened if Governor Blaine had won that Presidential election? Maybe Blaine County would have been called Cleveland County instead. And maybe Cleveland would be called Blaine. And legions of NFL fans searching for information about the upcoming Cleveland/Cowboys football game would not have to sift through dozens of my photos of cowboys from Cleveland, Montana before finding what they were looking for. But I digress.

One of the big reasons I wasn’t happy Cleveland was removed from the map is because it was hard to provide a geographical reference for my photos when geotagging them on some websites. If I took a photo of a cowboy near Cleveland I could no longer type “Cleveland” into a Google application and automatically have that app direct me to Cleveland, Montana. No, I had to manually search for Cleveland. And in the grand scheme of problems our world faces, that’s not really such a big deal. But when you take thousands of photos in and near Cleveland, Montana it quickly becomes a pain in the ass for this photographer.

But that wasn’t the big reason I was mildly upset. The biggest reason was because I was concerned Cleveland might one day be forgotten. I know there some residents near Cleveland would probably be happy if the rest of the world couldn’t find their beautiful place on the map, keeping it from the prying eyes of others who might destroy things as we know it. But for me, I saw it important to preserve the legacy of that small dusty town that sits in the shadow of the Bear Paw Mountains that has been so good to me.

So what did I do? I began contacting Google. Again, and again, and again. And as they say, the squeaky wheel gets the grease. Was I the only one who contacted Google? I’m not sure. Probably not. But lo and behold, Google finally put Cleveland back on the map.

And I am happy again.